Memos to a New Millennium 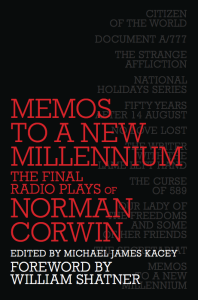 BearManor Media proudly announces the release of its new book, Memos to a New Millennium: The Final Radio Plays of Norman Corwin. The first time ever in print, this is a treasure-trove of radio plays spanning fifty years of the extraordinary career of radio’s most famous dramatist.

Subject matter for Corwin’s radio plays varied greatly. He was equally at ease writing light comedy replete with mischievous rhymes as he was in crafting history lessons that, although written with poetic language, strike hard and fast, delivering their import with expert efficiency. Be it universal human rights, the power of prayer, the atomic bomb, the origins of a national holiday, the birth of the Statue of Liberty, the meaning of democracy and freedom in America, the struggle between science and magic in our world, or an earnest memo to the Third Millennium, Norman Corwin tackled it all with poise, humor, and, above all, conviction. Beginning with Citizen of the World, his final production for the CBS Radio Network in July 1949, through his Peabody Award-winning years at United Nations Radio, and culminating with his National Public Radio series finale, Memos to a New Millennium broadcast on December 31, 1999, this book covers the last half of the twentieth century as only Norman Corwin could.
Purchase today!