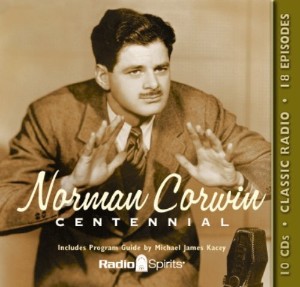 For those of us who have listened to the works of Norman Corwin and have been inspired by the words of this poetic genius a collection of his most famous radio works comes just at the right time. Norman Corwin’s Centennial, released by Radio Spirits, will transport our ears and minds back in time to classics such as the Bill of Rights Special: We Hold These Truths, The Undecided Molecule, The Plot To Overthrow Christmas and others.

In addition, a nice accompaniment to the CD is a Program Guide, written by Michael James Kacey, which contains information and photographs of this radio legend.

Whether you’re rediscovering the words of Norman Corwin all over again or experiencing the history of The Poet Laureate of Radio for the first time, this is the one CD that should definitely be added to your collection.

CD 03 – THE PLOT TO OVERTHROW CHRISTMAS (12-22-40) This “Columbia Workshop” is a repeat production of the first show Corwin wrote for CBS. Starring Eric Burroughs. (30 min)

THEY FLY THROUGH THE AIR WITH THE GREATEST OF EASE (04-10-39) Corwin’s second original script was inspired by his anger at the new tactic of civilian bombing and such massacres as Guernica. This is the repeat broadcast on “The Columbia Workshop.” Starring House Jameson. (30 min)

CD 04 – DESCENT OF THE GODS (08-03-41) Number 13 of “26 by Corwin.” Corwin’s version of what happens when the goddess Venus and gods Mars and Apollo visit America. Satire driving home Corwin’s astute observations of our modern society. Starring Henry Morgan. (30 min)

MARY AND THE FAIRY (03-31-41) Number 17 of “26 by Corwin” stars Elsa Lanchester as Mary and Ruth Gordon as the Good Fairy who arrives to grant her five wishes for winning the Krinkly Krunkly Bread slogan contest. Thurl Ravenscroft is the singing narrator, Art Gilmore announces. (30 min)

CD 05 – BETWEEN AMERICANS (12-07-41) “The Gulf Screen Gulf Theater” presentation of a “26 by Corwin” script starring Orson Welles was broadcast the evening of the attack on Pearl Harbor. This night Corwin was traveling to Los Angeles by train preparing to direct “We Hold These Truths.” (30 min)

TO TIM AT TWENTY (08-19-40) Corwin wrote this story especially for Charles Laughton and Elsa Lanchester. A British flyer about to leave on a one-way mission writes a letter to his five-year-old son, to be opened in 15 years. This was the second half of “Forecast.” (15 min)

14 AUGUST (08-14-45) Corwin wrote this piece literally overnight in order to celebrate V-J Day. It is a single-voice play with only one sound effect; the sound effect is a cannon firing, the single voice is Orson Welles, who had been up some 36 hours broadcasting war reports over KFWB, Los Angeles. (16 min)

CD 06 – AMERICA AT WAR (02-14-42) The premiere episode of the government produced series “This Is War!” produced and directed by Corwin. Corwin wrote this episode as well, starring Navy Lieutenant Robert Montgomery. The thirteen-week series aired on all four networks. (30 min)

CROMER (12-01-42) The first of four broadcasts that were an extension of the CBS-BBC co-production of “An American in England” produced in England by Edward R. Murrow and starring Joseph Julian. It was Corwin’s job to introduce Britons to Americans, some of who were still suspicious of England’s motives. Life in the tiny east coast English town of Cromer is explored, only 30 minutes flying distance from Germany. (30 min)

CD 07 – THE LONG NAME NONE COULD SPELL (03-14-44) The second of 22 “Columbia Presents Corwin” broadcast in 1944 is an expanded version of a show originally performed at Carnegie Hall in 1943. This hard examination of the betrayal of Czechoslovakia in 1938 foreshadows Corwin’s greatest piece “On A Note of Triumph.” Starring Martin Gabel and CBS reporter William L. Shirer. (30 min)

UNTITLED (05-30-44) This “Columbia Presents Corwin” is the repeat performance about a dead American solider named Hank Peters as told through the eyes of those who knew him, and even the Nazi soldier who killed him. This powerful play stars Fredric March. (30 min)

CD 08 – THE ODYSSEY OF RUNYON JONES (04-04-44) This version on “Columbia Presents Corwin” is a new production of a script originally produced on “26 by Corwin” in 1941. A fantasy about a boy’s desire to be reunited with his recently deceased dog Pootzy, who has been banished to Curgartory. Later published as the novella “Dog in the Sky.” Starring Michael Artist. (30 min)

EL CAPITAN AND THE CORPORAL (07-25-44) “Columbia Presents Corwin.” A romance on a Los Angeles to Chicago train (The El Capitan) between a corporal heading off to the war and a young woman whose brother lost a limb fighting in the Spanish Civil War. Starring Joseph Julian and Katherine Locke (later Mrs. Norman Corwin). (30 min)

CD 09 – THE UNDECIDED MOLECULE (07-17-45) This play was the third of 8 “Columbia Presents Corwin” broadcast during the summer of 1945. A cosmic comedic play in verse (Corwin’s first since “The Plot to Overthrown Christmas”) concerning the rebellious Molecule X, who refuses to be assigned to be a part of just anything. Starring Groucho Marx and Vincent Price. (30 min)

ONE WORLD FLIGHT (01-14-47) The introductory episode to Corwin’s thirteen-part documentary series featuring audio recorded on his flight around the world in 1946 as winner of the first Wendell Willkie One World Award. Narrated by Norman Corwin, this episode serves as an overview and features clips to be heard on the later episodes. This would be Corwin’s last series for CBS. (30 min)

CD10 – COULD BE (10-23-49) This repeat broadcast from United Nations Radio aired on CBS. Corwin was head of Special Projects for UN Radio and this was his first effort. Taking place in the near future, a possible future, and told in a documentary style, the listener travels around the world hearing coverage of the Peace Blitz wherein the worldwide problems of famine and disease are literally attacked by military forces who seed fields, open dams, and exterminate disease-carrying vermin. Starring Martin Gabel. (60 min)