Home » The Poet Laureate Of Radio: An Interview With Norman Corwin (DVD) 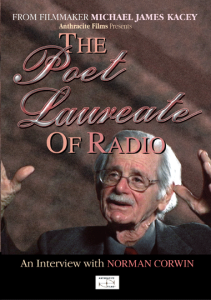 THE POET LAUREATE OF RADIO (Anthracite Films) — Earlier this year a half-hour short subject, A Note of Triumph: The Golden Age of Norman Corwin won an Academy Award. As good as it is, it only scratches the surface of this extraordinary man’s life and career, which continues to this day, past Norman’s 96th birthday. Two years ago, filmmaker Michael James Kacey sat down with a video camera to review Corwin’s work in the medium that made his reputation and gave him his greatest opportunities: radio. Now Kacey has made his interview available on DVD.

This is a no-frills enterprise; it consists of Norman sitting in front of a backdrop and talking about his experiences. Believe me, that’s enough. Corwin’s career is the stuff of legend, and to have this chronicle in his own words is priceless.

Norman Corwin is one of my heroes, personally and professionally. If you don’t know his work, I urge you to seek out recordings of his radio plays, especially the celebrated On a Note of Triumph. Or perhaps you should begin your journey with this interview; Corwin’s eloquence and passion may well inspire you.